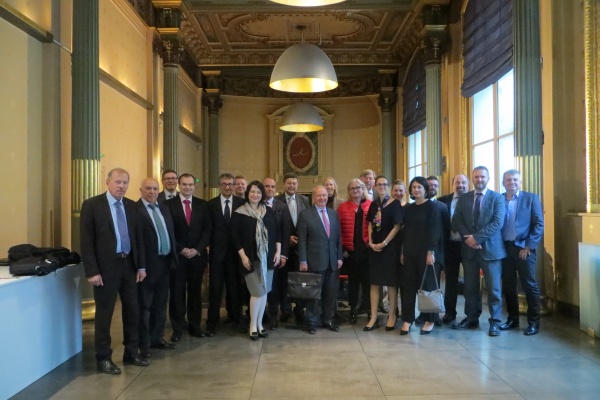 The International Chamber of Commerce (“ICC”) is committed to make business work for everyone, every day, everywhere. Since its inception in 1919, ICC has constantly worked to improve the economic and regulatory framework of business activities. ICC’s founders who called themselves the “Merchants of Peace” considered that fostering international growth and development through international trade was instrumental in ensuring peaceful relationships between countries and individuals. However, the ICC organizational principle, which limited membership to companies and individuals that believed in and promoted the free market economy and gave access to the ICC working groups only to these members, ignored a substantial share of other players involved in international trade. Within the ICC framework, its members were not in a position to exchange views with actors from countries that did not recognize the free market as a key economic principle.

Since the decision to set up ICC in 1919 international trade developed to unprecedented levels. This happened despite the tremendous diversity of countries’ political or social structures. ICC identified this increasing volume of business relationship and the lack of institutional channels to discuss topics of common interest with actors from countries with planned economies as a growing impediment to the further development of international trade. Therefore, in May 1964 ICC established the “East/West Committee” to address this situation.[1]

Originally, the Committee was composed of ICC members and members of the Chambers of Commerce and Industry of Bulgaria, Czechoslovakia, the German Democratic Republic, Hungary, Poland, Romania and the USSR. It operated through a number of working groups dealing with specific technical aspects of trade such as trade facilitation in general, joint ventures, banking, marketing[2]and dispute resolution.

Regarding dispute resolution the idea was to set up a system providing contractual partners from countries having different political and economic regimes with guaranties as to the efficient, impartial and confidential[3]resolution of disputes arising during the performance of international agreements. Arbitration was felt to be the most appropriate legal mechanism to achieve this purpose. This led to the creation of the Working Group on Arbitration in 1975[4]9, also referred at that time as the ICC “East-West” Working Group (the “Group”).

In the 1980s, the Group focused its activities on three main topics: (i) cooperation between ICC and Chambers of Commerce of the Eastern European members of the Group in exchanging information about laws and regulations on arbitration, (ii) cooperation in exchanging information regarding the choice of competent arbitrators, and (iii) the study of the role of the pre-arbitral expert.17

One of the Group’s practical achievements was a proposal of a recommendation to the East/West Committee on the advisability of referring disputes arising out of or in connection with the East-West trade and economic cooperation contracts to arbitration. This recommendation, adopted by the East/West Committee in 1984 contemplated the suitability of offering an option to refer such disputes to the courts of arbitration attached to the Council for Mutual Economic Assistance ("COMCON"[5]) countries’ Chambers of Commerce and Industry, or to arbitration under the ICC Rules.

The Group held regular meetings and organized seminars and other events opened to the public or selected participants. The first seminars took place in Prague in 1978, in Budapest in 1980 (Techniques in East/West Trade relations[6]), in Paris in 1983 (Differences between arbitration under the ICC Rules and the Rules of Procedure of the Foreign Trade Arbitration Commission of the USSR Chamber of Commerce and Industry[7]), in Varna in 1986 (Evidence in Arbitration in Eastern and Western countries)and again in Paris in 1990 (Joint ventures between companies from COMCON countries and their foreign partners, the resolution of disputes arising out of such joint ventures’ activities by international arbitration).[8]

Following the geopolitical changes in Europe at the end of the 1980s and at the beginning of the 1990s, a question arose as to whether the work of the Group should be continued. The question was prompted by the setting up of ICC local chapters called “ICC National Committees” in many countries formerly classified as “Eastern countries”. In countries where such National Committees had not been established, local actors had the possibility to join ICC as direct members. This new organizational framework empowered ICC to rely on these National Committees to promote arbitration in the respective countries. However, the growing relevance of dispute resolution for East-West business transactions and the specific features of the Group led to the decision to maintain and further strengthen it, and to change its name to the “ICC European Arbitration Group”.10

At the same time, the composition of the Group had to take into account the political developments affecting former socialist countries, the increased caseload and activities of the ICC International Court of Arbitration involving these countries, as well has the greater number of ICC Court members coming from this part of the world. The composition of the Group remained largely the same until 2015 (see below), and its membership was divided into three categories of participants.

The secondcategory of members was composed of representatives of arbitration institutions of the chambers of commerce of Eastern and Central European countries. Traditionally only one chamber of commerce per country was invited to be part of the Group through the Chairman or President of its arbitration court. However, the question of whether it is appropriate to open up the Group to dispute resolution providers from other chambers has been debated regularly. The Group has been reluctant to accept arbitral institutions that do not have a long-standing track record of administering international arbitration proceedings or institutions which are not located in Central or Eastern Europe as members[9].

A thirdcategory of participants, having an observer status, and who were invited on a case-by-case basis when it is uncontested that their knowledge or field of activity could be a useful resource for the Group.

Despite structural changes in the Group, the later continued holding its meetings and discussion about the recent developments in the region. Traditionally, the Group held two meetings a year.[10] However, for the last two decades the Group has convened only once per year. Locations were alternatively fixed in Paris and in a country previously characterized as an “Eastern country”.

Thus, the Group’s 1991 Paris meeting was devoted to the enforcement of arbitral awards. In 1992, the Group’s meeting in Sofia addressed the question of arbitrators’ fees in international arbitration and the future of the 1972 Moscow Convention. The same year a conference on Privatization and International Commercial Arbitration was held in Budapest. In 1993, the Group discussed the “Composition and the procedure of the Special Committee referred to in Article IV of the European Convention on International Commercial Arbitration” elaborated under the auspices of the Economic and Social Council of the United Nations as well as the programme of the seminar “Investment in Czech and Slovak Republics: After the Separation”.

In May 1990, the first issue of the European Arbitration Bulletin (the “EAB”) of the ICC International Court of Arbitration was published at the Group’s suggestion. The purpose of this newsletter was defined in the introduction to its first issue as “promoting arbitration as a means of solving disputes in East-West trade and commerce”. The first issue focused on three main topics: the new regulations and practice of international commercial arbitration in a number of COMCON countries, information about the seminar on East-West joint ventures and arbitration held in Paris in February 1990, and information about the new publications on East-West arbitration and arbitration regulations in COMCON countries. It seems that this first issue of the EAB was not followed by any substantive similar publication. One explanation was the profound desire of participants to keep the debates within the Group confidential and the complexity of the elaborative process required to prepare such a publication.

A short article on the Group’s works was published in the October 1993 issue of the ICC International Court of Arbitration Bulletin (the “Bulletin”).[11]It contained very general information about the Group’s May 1993 meeting in Paris. As usual, the developments in arbitration laws and practices in Central and Eastern European countries were discussed. The article also mentioned that the Group was cooperating with the Bulletin on the preparation of a special supplement to the Bulletin on arbitration in Europe.

This special supplement entitled International Commercial Arbitration in Europewas published in December 1994. It focused primarily on describing the new arbitration laws adopted in the Czech Republic, Hungary, Italy, Moldova, Romania, Ukraine and Russia in 1993-1994.[12]The special supplement also provided information on arbitration legislation, case law and practice in certain other Western and Eastern European countries, such as Bulgaria, Croatia, Germany, England, Estonia, Poland and Slovenia. Arbitration within the legal framework of the European Community was also addressed.

Significant economic changes in 1990-2000 in the Central and Eastern European countries raised again the question about the future of the Group and its mission. Dr. Briner, the Chairman of the ICC Court in 1997-2006, launched the idea of revival of the Group’s works “in a changed context”.This idea was welcomed “with great enthusiasm”by the presidents of the courts of arbitration of the ex-COMCON countries.[13]

Since 2000, the Group’s meetings have each lasted a day and had similar agendas, enabling participants to measure and compare the evolution of the arbitration framework in the various countries represented. Each institution is required to submit a report setting out the main developments in arbitration and since the early 2000s in conciliation and other amicable dispute resolution proceedings in its country in advance of each Group meeting. The reports focus on statistical data, the modifications of the institutions’ dispute resolution rules, national laws and case law. Each institution is asked to present its report and answer questions from participants about these reports and presentations. The second part of the meeting is devoted to topics of common interest that have been chosen jointly by members. The homogeneous structure of the Group, the in-depth consultative process used in drafting the agenda and the confidentiality of the discussions ensure that the items discussed are highly relevant.

Since 2015 at the suggestion of Alexis Mourre, the then President of the ICC International Court of Arbitration, the Group changed its name to “ICC Central and Eastern European Institutional Arbitration Group”. The new name was introduced with a view to more accurately reflect the new membership of the Group, leaving the ICC the leading role in coordinating activity of the Group. The ICC International Court of Arbitration Director for Europe, a position created in 2015, was appointed as the Secretary of the Group.

The text of this article is based on and is a follow up on a previous article titled “The European Arbitration Group” published in Festskrift till Gustaf Möller, Dan Frände, Lauri Railas and Eva Storskrubb (Eds), Juridiska Föreningen I Finland, JFT, 2011, pp. 487-494.

[2]European Arbitration Bulletin of the ICC International Court of Arbitration, №1, May 1990, p. 1.

[3]It is interesting to point out that confidentiality was repeatedly emphasized as a fundamental feature of arbitration proceedings in this context.

[6]The discussion was focused at the main characteristics and differences between procedural rules of arbitral institutions from Eastern and Western countries.

[8]European Arbitration Bulletin of the ICC International Court of Arbitration, No. 1, May 1990, p. 1.

[9]With an exception of Kazakhstan, as historically Kazakhstan is closer to the European developments and traditions.