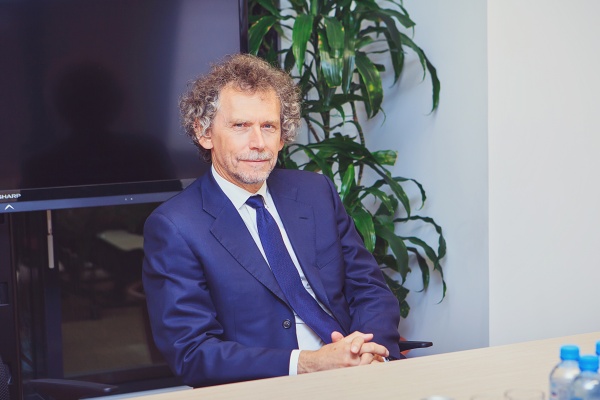 AS: When did you decide to go down the path of international arbitration? What was the crossroad in your life?

AS: What was the outcome of your first international arbitration case?

GB: The outcome was good. It is not a secret and has been published by the press. There was an award of USD 8 million rendered by the arbitral tribunal, Prof. Claude Reymond, Sir Owen Woodhouse and Prof. Francoise Terre, in favour of the claimant, Greenpeace. This amount was more than enough to buy a brand new "Rainbow Warrior II," which enabled Greenpeace to resume their protest voyages in the South Pacific ocean.

GB: Well, I have always been motivated by adventures. Perhaps, the person that was responsible for this motivation was the President of the State of Eritrea at the time of the arbitration proceedings against the Republic of Yemen in which I represented Eritrea. This was my second major arbitration case. Eritrea had a dispute over the chain of islands in the Southern end of the Red Sea ("Zuqar-Hanish Islands"). The dispute was between Eritrea, on one side of the Red Sea, and Yemen, on the other side. The islands lay between them. The President of Eritrea wanted us to assist him in ensuring that the islands remained available to the people of Eritrea who had used them since time immemorial. This case was one of great political sensitivity and had international ramifications, as the resolution of this dispute between these sovereign states about islands would affect world peace and peace in the region. The opportunity to work on a case such as this was both an exciting adventure and, at that time, a worthy cause which also cut my heart.

AS: In practical terms, Counsel in arbitration proceedings frequently deal with the tricky problem of properly citing and quoting the legal authority that has been authored by one of the arbitrators in the panel. How do you feel about this? What is your reaction when Counsel in the proceedings cites your work?

GB: This must be looked at from multiple perspectives - from the perspective when I am sitting in the arbitral tribunal or, alternatively, I am Counsel or opposing Counsel in the case or an expert witness. There is an old European saying that, when a man or woman writes a book, he or she gives a gift to his or her greatest enemies. I think that's true.  Writing a book on international arbitration or any aspect of international law is a gift to others because, although you can't credibly cite it, other people are free to cite your writing against you in proceedings. My own view is that my books (I don't know about other people's books) are first drafts.. even if the book is the second edition of "International Commercial Arbitration". In the introduction to my book, I admit that there may be mistakes in it; I am right that there are mistakes there. When I see my books cited to me and treated as someone else's work, it is not as if I wrote it, but as if someone else wrote it, and I do not treat it any differently from any other authority. Perhaps I am a little more sceptical about it.  The important point is that it does not either offend me or impress me or disturb me if Counsel cites my book; there is no difference between citing it or someone else's work.

AS: Moving forward to your Asian experience: currently, most Russian companies, especially corporations with state participation, tend to change their standard arbitration clauses and refer their disputes to Asian dispute resolution centres. Being the President of the SIAC, have you noticed the increasing role of Asian arbitration for European counterparties and probably in cases involving Russian parties?

GB: Over the last 5-10 years, a very dramatic increase in the SIAC's caseload has been observed. The caseload at SIAC last year increased by 35% to 450 cases a year - that's more than double any other institution in the region. SIAC sees itself as a global arbitral institution in competition with the ICC. SIAC has a global reach and attempts to provide services and administer arbitrations in a way that is at the forefront of current international practices. SIAC has adopted procedural innovations ‒such as expedited procedure, emergency arbitration, and now early dismissal ‒which other institutions here in this region, SCC and ICC, also subsequently adopted. SIAC also has a multilingual secretariat, including Russian speakers and Russian-qualified lawyers, which enables us to administer cases that come from all over the world.

GB: I do notknow much about the history of arbitration, including "pocket" arbitration courts, in Russia; thus, I cannot comment on particular experiences in the past. I do think that, as a general principle, the UNCITRAL Model Law provides very good tools, internationally tested and accepted, for dealing with arbitral institutions and arbitral tribunals that lack independence and impartiality. In particular, the Model Law provides mechanisms both for removing arbitrators who lack independence and impartiality, and for annulling or denying recognition and enforcement of arbitral awards that are made by institutions that are not independent or impartial or by tribunals that lack independence. My own view is that these mechanisms provide a calibrated and sensitive means of dealing with the issues related to independence and impartiality in international arbitration. I am skeptical about most broader legislative efforts to address this problem, including, particularly, a registration requirement for arbitral institutions. Most other countries do not have similar requirements and I worry that in this case the cure is worse than the disease. If you already have mechanisms to deal with arbitration that is not impartial, then what is actually being accomplished by imposing the registration requirement? There is also the ancient phrase, "who will watch the guards?" What is the result of the registration process - does it produce arbitral institutions that provide the guarantees of impartiality and independence or does it create additional risks of that sort through its very existence in individual states? I also worry about the effect internationally of individual countries deciding that they do not want particular categories of disputes to be subject to international arbitration, instead only to be subject to institutions which they approve and register. This seems to me to raise more concerns about the independence and impartiality pf arbitral institutions than those that lay at the roots of this reform. I think that the reform is guided by good intentions but, on the other hand, it is often said that the path to hell is paved with good intentions. I think that it is necessary to carefully consider whether the reform afforded in this case does not substitute a worse regime for the disease that it attempts to cure.

GB: Actually I am not sure about the complete answer to this question, but I do have a few observations. One is because of the language. The most common languages used in ICC arbitrations are English, French and Spanish. One would have to ask how many Russian arbitrators are able to conduct an arbitral proceeding comfortably in these languages. Maybe the existing pool of Russian arbitrators able to conduct arbitrations in those languages is more limited than what you would see in the UK, France and Switzerland. That is part of the explanation. Another part of the explanation would be to question to what extent Russian practitioners, who are qualified in the law of the jurisdictions that are frequently used in ICC arbitrations. Now we know, of course, that ICC arbitrations, like SIAC arbitrations, frequently involve disputes under many substantive laws, but the most frequently used substantive laws are English, Swiss, French, some US or other European continental, Asian or other laws. I think the question is, how many of the credible Russian candidates would be qualified in the laws of one of those particular jurisdictions? To some extent, this may be generational - if you look at Russian lawyers who are younger than 45 years of age, you would find a substantial number of lawyers who are qualified in New York, London and some European jurisdictions and would, therefore, be quite credible candidates, but the ICC is probably not appointing a lot of people at that age as arbitrators. Third, I think, in a way, that Russia's economic and commercial strength plays against it in this particular aspect of the international arbitration process. When the ICC comes to appointing arbitrators, they will look for neutrality in the arbitrator and, just as you do not see a lot of US and Chinese names in the ICC figures, so you do not see a lot of Russian names. I think all of those factors go part of the way towards explaining the small number of Russian arbitrators. However, at present, although these factors may (or may not) explain, to a small extent, the difference between 7 and 219 appointments and confirmations, we cannot know for sure, but there is surely some additional reason for the great difference in the figures. I think part of it is that Russia is a new entrant and new entrants need to prove themselves. Therefore, I think there is an inevitable process in which the new younger generation will become better known or well-known, and it is something that it is very hard for the older generation to do in the time available to them. Whether I am right or not is something that we can test, but we will have to wait to see whether, when you or an associate of yours are conducting this interview in 10 or 15 years, you will be dealing with different statistics. My sense is that you will be.